Backlit marble, an innovation for your sites “Haute Decoration»

Backlit of stones fascinates interior architects and designers whether for residential projects, luxury tourism establishments or major brand stores. Haute Decoration is the specialist in France in technical innovations for luxury marble. It is therefore quite natural that our customers have asked us to work on the development of high-performance, homogeneous backlit marble solutions that are perfectly suited to the specifications of their sites.

The translucent properties of alabaster have been known since ancient times. The wealthy Romans used alabaster sheets to replace glass, and the Emperor Nero had a temple built without windows: the sunlight diffused through the alabaster walls was sufficient to provide the interior lighting of the temple. Unfortunately, alabaster is a fragile, heat-sensitive stone available in small sizes, so difficult to use for contemporary design.

Haute Decoration implements techniques of rolling stone in very thin thickness (3 – 5 mm) which allow to backlight various naturally opaque or insufficiently translucent stones such as white and veined marbles, onyx, quartzites, by associating them with a transparent support such as glass or synthetic materials.

Our strength: The in-house association of the technical skills of the marble maker and the lighting professional to guarantee a tailor-made aesthetic, consistent and completely reliable result.
Haute Decoration and Mondo Marmo Design have jointly set up a Research and Development project which today culminates in the PIETRALUX® system.

PIETRALUX® is the expertise of Haute Decoration in marble on composite supports associated with the expertise of Mondo Marmo Design in the backlighting of stones.
A strong commitment to the excellence of your backlit marble projects!

The stones suitable for backlighting PIETRALUX®

Alabaster poses no problem for the backlighting, but it presents significant technical constraints. Sensitive to scratches, available only in small formats less than or equal to 1 m² (which greatly increases the number of joints) and sensitive to heat (risk of turning into opaque plaster), it must be subject to extensive prior treatments and expensive to be able to enhance all its aesthetic qualities.

Onyxes (chalcedony) can be naturally translucent. White onyx is already very translucent at 20mm while colored varieties loaded with oxides will only be translucent from 10mm.
The range of colors available is very wide, ranging from pure white to black.

• They are made up of more or less large crystals. These are stones that are too weakly translucent in a thickness of 2 cm, but the new sandwich techniques offered by Haute Decoration make it possible to reduce their thickness to 3 mm. With this thickness, these stones then become translucent and will make magnificent decorations when they are backlit.

Quartz is a mineral very present on earth, we find its presence in many ornamental rocks. We are talking about pure quartz here. In its completely transparent crystallized form, it is used in jewelry, especially when it is tinted by oxides (amethyst, citrine, etc.). In its decorative form, crystallization is not perfect, quartz is milky. This stone is then used in marble for prestigious projects. Its origin is Brazilian.

They are naturally translucent, even transparent. These stones come from the field of marble, apart from the Brazilian agate which, finely sliced and agglomerated in transparent resin panels, is used on very high-end sites.

Special mention for these stones like travertine or lava which, demeaned to a few mm, let in the light with a spectacular design.

The know-how of backlit marble stone side PIETRALUX®

Backlit marble is the marriage of 2 worlds that are apparently totally antagonistic: stone and light.

Haute Decoration and Mondo Marmo Design master the splitting of the stone to a thickness thin enough to allow the light to pass through, either thicknesses of 3mm (marble – quartzites) or 5mm (onyx).

The choice of glass or synthetic material support as well as the lamination technique are essential elements for the quality of the final result. 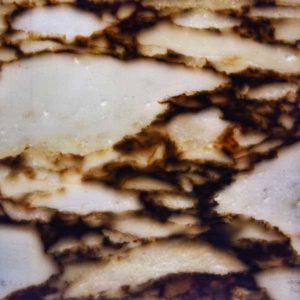 Glass is a very efficient solution for a “Haute Decoration” quality project.

The glass laboratory associated with PIETRALUX® glues the glass ensuring the absence of air bubbles, which would be visible in the backlight. To do this, the bonding is carried out under vacuum and in a high temperature oven to achieve the required level of quality.

Haute Decoration and Mondo Marmo Design only use extra clear glass so as not to modify the color of the stone.

In partnership with a structural design office specializing in glass material, Haute Decoration carried out resistance tests on several types of glass:

Depending on the resistance parameters of the different types of glass and their thickness, we are able to advise you on the best answer to meet all your stone bonded to glass projects.

To resolve the technical constraints of glass (weight and fragility in the absence of specific treatment), the Haute Decoration design office and Mondo Marmo Design in partnership with a manufacturer of technical adhesives developed a specific process in January 2021 to assemble a synthetic marble / glass sandwich which solves the physico-chemical constraints which hitherto blocked the use of this material due to the flatness defects and the presence of air bubbles. This innovation now makes it possible to replace mineral glass with synthetic glass for non-structural applications.

The undoubted advantage is the weight (11Kg / m² against 50Kg / m² with a glass sandwich). This solution is particularly suitable for projects subject to heavy weight constraints such as ceilings.

The composites industry has recently developed solutions based on synthetic material and air in the form of translucent foam. These panels provide a high performance solution with a weight of 3.4 Kg / m² (i.e. 12 kg / m² with 3 mm of stone), excellent mechanical performance thanks to the fiberglass skins (as for the honeycomb) and fire classification DIN 5510.

The range of PIETRALUX® solutions

Now that we have made a translucent stone + transparent support composite sandwich, it is essential to combine it with stone backlighting solutions of high aesthetic quality (uniformity of lighting), reliable (durability – maintenance) and certified ( humid environment and electrical standards): this is the area of expertise of Mondo Marmo Design and our partner.

Indeed, the design and realization of a backlit marble project is complex if the 2 components: marble AND backlighting are not treated together. The essential risks would then be:

The know-how of backlit marble on the light side PIETRALUX®

The Research & Development work carried out between Haute Decoration and Mondo Marmo Design leads in 2021 to the development of the PIETRALUX® system which integrates both “marble” issues and “backlight” issues. The PIETRALUX® system is composed of 3 LED solutions implemented according to the specific specifications of your project.

It is necessary to list all the constraints of your site upstream so that we can offer you the most suitable solution.

PIETRTALUX® guide to drafting a C.C.T.P for a stone backlighting project

Lumen
This is the light output of a light source, for example a kitchen bulb radiates approximately 400 lumens (lm).

Watt
This is the electrical power consumed by the lighting • Lumen / watt: this is therefore the efficiency of the luminaire. A highly efficient LED luminaire typically has more than 100 lm / w. But if the flow is measured behind the stone and the latter is not very translucent, the yield is obviously affected.

Plenum
Distance required between backlight system and material. It varies between 0 and 10 cm. The larger the plenum, the more economical the technical solution will be.

IP
Tightness level of the system against water and dust. For use in bathrooms with water jet (shower), PIETRALUX® is offered with a totally waterproof system classified IP68.

Dimmable
Ability of the lighting to vary its intensity (thus the number of lumens) according to a user command.

Dynamic white
Ability of the light to vary its color based on a user command. This is achieved by using a warm white and a cool white backlight, both of which are variable in intensity.

IRC
Color Rendering Index, which is the ability of lighting to render the true colors of the material being lit. The reference is the sun (IRC 100). Poor lighting will have a CRI of 65. Very high quality lighting will be 90; an IRC of 80 remaining a completely acceptable level for most applications.

Need information on one of our solutions? Contact us with the following form: